Fighting Through the Tear Gas on Occupied O’odham Lands

Last night we edged beyond the limitations of anti-fascism on stolen lands. As marches converged and crowds swelled, amidst black flags and a banner reading “United Against Colonialism and Fascism, Smash White Supremacy,” we coalesced into a force, at times chanting the inspired, “Settler scum, your time has come.”

The police constructed a barricade ringed pen, complete with entrance choke points, to herd anti-Trump protesters into an echo chamber where chants of “shame!” intermingled with the truly deranged “this is what democracy looks like.” Seemingly much of America has abandoned any hope of salvation in colonial democracy, while the anti-Trump Left continues to burn a torch for a system that has always represented the imposition of colonial power and white supremacy.

The barricades were in our way so O’odham and Diné relatives took to the task of dismantling them, as riot clad police unleashed a torrent of pepper balls on the bloc and anyone near by. The authorities, ever fearful that any individual or collective act may shake the chains of domination, fired round after round of pepper ball projectiles at the reinforced banner, and then lowered their aim to peoples legs. The bloc held our ground under the barrage until canister after canister of tear gas (we counted 7 in a matter of seconds in our immediate area) were launched and a wall of poison washed over us forcing us away from the barrier. Street medics swiftly treated those unprepared for the assault, police targeted anyone throwing bottles, rocks, and trash with tear gas and pepper balls. 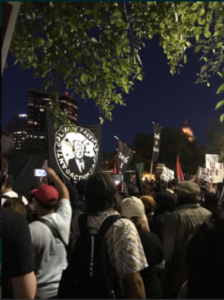 As greater numbers of police assembled outside of the convention center, the riot pigs threw concussion grenades over our heads resulting in deafening explosions as a helicopter circled over the scene barking orders. The melee extended for over an hour into side streets. Despite the pleas of the respectable organizers, many chose to resist authority and the law and to fight back against state repression. People fought back when a truck full of Trump supporters threatened to run people over, the police arrived before the driver could double back but they didn’t help the crowd, rather they released the driver and attacked the dwindling crowd with even more chemical weapons.

Phoenix PD, flanked by an array of Federal agencies and in truest form, fortified the powder keg of white supremacy, hetero-patriarchy, and colonialism. An Arpaio pardon sticker slapped on the keg by Trump didn’t make the difference for us, we’re against all presidents and fascists. Make no mistake, we were not the spark or match, in a storm of lightening strikes the shit is bound to explode.

We are acutely aware of the propensity of the violence the state so the pig’s “use of force” was expected. Earlier, as we walked into the fray, with Charlottesville and the multitude of other flash-points in this escalating conflict on our minds, our Diné sister Loreal Tsingine, who was murdered by fascist cop Austin Shipley in Winslow, was in our hearts. Her story is plastered on the cover of Phoenix New Times with an article that echoes what we’ve decried on a systemic basis for years: Arizona has the highest rate of police violence inflicted on Indigenous Peoples.

This is the reality that prepares us for these moments, and it didn’t begin with Trump, or Loreal’s cold blooded murder. It is state violence perpetrated by colonizers for hundreds of years in these lands. Liberal movement police maintain that social arrangement by attempting to suppress and control resistance. They posture to appease their funders, their storm makes it rain dollars to perpetuate their unending anti-oppression gala. 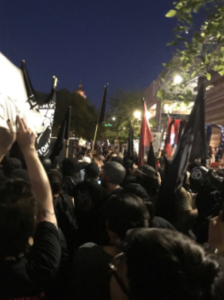 While liberals and media spin accusatory wheels with the “anti-fa threw the first punch” condemnation, let us clarify that it does not concern that punches flew; after all, colonization is war. Indeed the first punch was thrown long ago, with the force of colonial terror and genocidal wars that have been inflicted upon Indigenous Peoples in the so-called “US.” This is the context in which we continue to wage resistance. This blindspot forces liberals to march in unending circles, with, around, and through, colonial power

Rhetorical cliches like “You’re just full of hate and violence” and “take off your masks” were thrown at anti-colonial anti-fascists in the streets of occupied O’odham lands aka Phoenix. To which several of us responded, “we’ve faced more than 500 years of white supremacist colonial violence, don’t tell Indigenous Peoples how to resist.” As some near our crowd chanted “This is what democracy looks like,” the anarchist tendency of our bloc raged, “This is what democracy got you.”

We reject the notion that white nationalists will come to the understanding of the wrongs of their ways. We are too keen on history and fresh graves. The irony is, wannabe movement managers myopic calls for peace that have precipitated the surge of the so-called “alt-right.” They’ll keep telling us to turn the other cheek until our faces have been lashed to bone.

As Indigenous, as LGBTQI2S, as brown, as black, as working-class and poor, we fiercely reject the liberal imposition of victim hood. We are rabid, we have claws, and we fight back and forward.

We have no pretense; last night was no victory, yet it should be known that O’odham and accomplices have history combating fascists/police in the streets of so-called Phoenix. The powerful actions of O’odham hands dismantling steel barriers that were defending white supremacists evoked the possibilities of the attack against all types of colonial violence. From the border wall in Tohono O’odham lands, to the South Mountain Freeway in Akimel O’odham lands.

The only victory we could ever accept is the total liberation of our lands and people. The gains we sought we’re fulfilled within the articulation of an anti-colonial and anti-fascist resistance and the exploration of the potential force (both tactically and ideologically) these positions can shape.