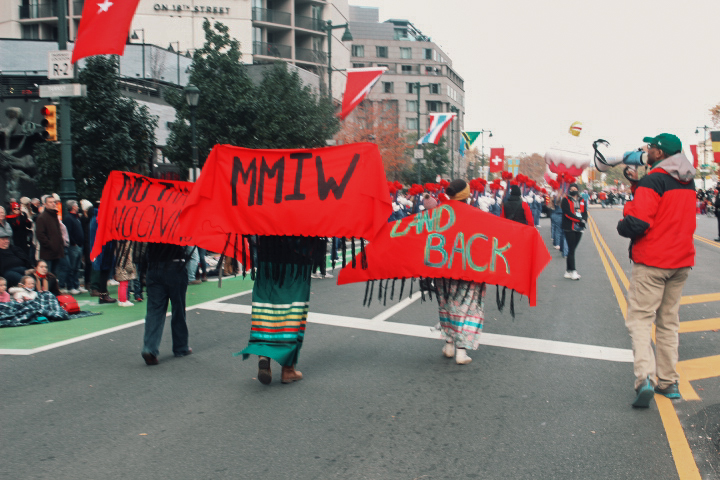 11/25/2021 – For Immediate Release – Lenapehoking (Philadelphia, PA) – As part of coordinated actions against colonialism led by matriarchs across Turtle Island, Indigenous women & femme activists disrupted the nation’s oldest “Thanksgiving” Day parade today, demanding the true story of Thanksgiving be told. Activists interrupted the parade & walked for several blocks wearing red fancy dance shawls with the messages “Land Back,” “MMIW,” & “No Thanks, No Giving” while chanting “No pride in genocide.” Though most spectators were quiet or supportive, a few heckled saying “Go home” and “Get out of Philly.” The Indigenous group included members of several tribes from across the so-called Americas, including local Algonquin & Lenape people, the rightful stewards of Lenapehoking, the Lenapes’ ancestral homeland that includes Philadelphia & NYC as well as other parts of settler-called Pennsylvania, New Jersey, Delaware, & New York.

The Thanksgiving myth perpetuated in schools across the nation celebrates unidentified “Indians” saving the early European settlers from certain death in the Eastern Coast woodlands. Holiday tables today are graced with foods indigenous to the Eastern Woodlands including turkey, squash, corn, & beans as well as other foods indigenous to the Americas including potatoes & rice. We are presented the story of a peaceful meal to honor friendship & prosperity between colonizers & those being violently colonized. And while there is certainly truth to the generosity of Native peoples, this romanticized version of a holiday feast is far from the colonial violence & genocide that the holiday truly commemorates. In 1637, Pequot elders, children, & families gathered in their villages for their annual Green Corn Dance ceremony, a harvest ceremony commemorated by dancing, feasts, fasting, & religious ceremonies. These sacred celebrations were often targets of colonial violence, as armed settlers used them to launch

attacks against & murder entire family structures. The first Thanksgiving was exactly that, as English & Dutch colonizers from the Massachusetts Bay Colony surrounded a Pequot village & mercilessly murdered over 700 Pequot elders, men, women, children, & two-spirit people, setting their village on fire & shooting anyone who attempted to escape the blazes. The next day, the colony’s governor declared a day of thanksgiving to celebrate & thank God for their victory. This was the first Thanksgiving.

It has been 529 years since the invasion of the Tainos, 497 years since the first reported enslavement of a member of the Wampanoag Nation, 384 years since this Pequot massacre, & 158 years since Lincoln declared Thanksgiving a national holiday. Yet to this day Indigenous people across Turtle Island are fighting for their sovereignty including the Lenape continuing to work for recognition within their own homelands; the Anishinaabe & others fighting Line 3; the Carrizo-Comecrudo, Tohono O’odham & others fighting the border wall; and Indigenous & Afro-Indigenous people from Central & South America, the Caribbean, Africa & more held in US detention centers & terrorized by US police & military. Today we demand the true colonial history of the United States be told, including Thanksgiving.

Quotes: “Thanksgiving is bittersweet. On the one hand it is the modern continuation of a very ancient time of fellowship & community. On the other hand, the whitewashed & Eurocentric version of Thanksgiving that we’re given with our pilgrim hats & our Indian headdresses is insulting not just to this longstanding cultural tradition, but to the memories & the spirits of the people who were murdered by colonizers who wanted their land & wanted their resources.” – Kate Thorn, Lenape/Seneca

“We are taking a stand because our genocide never stopped. They still poison our water, food, & air. They still steal our children & imprison our parents in jails & detention centers. They pump drugs into our homes & blame us for the epidemics. They stop us from moving freely in our lands. They erase us from the collective minds & consciousness, killing our memories when they cannot kill us. Colonizers are further erasing the history through renaming their holidays but not changing their participation in the settler-colonial project called the United States. The only true celebration of Native people will come when the US is abolished & we are free.” – Felicia Teter, Yakama